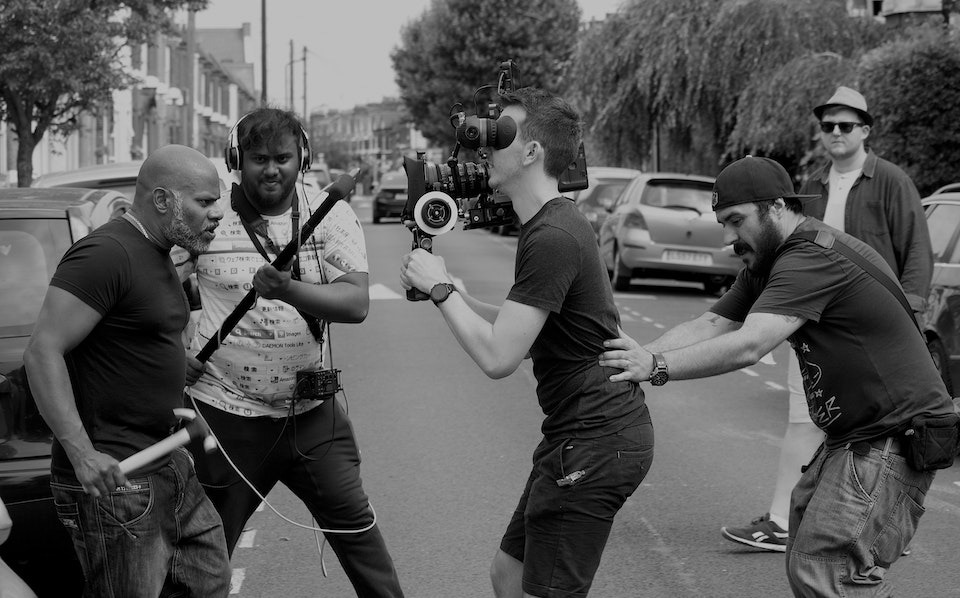 “I love it when a plan comes together” are the immortal words of one John “Hannibal” Smith, wiseacre and leader of the fondly remembered 80s action series The A-Team. Those are the words that come to mind when thinking about the overall trajectory of The Light; Urban Chronicles, episode 4 (titled Lam).

The references from the classic 80s show don’t just stop there, as The A-team - and their gang of entertainingly flawed, larger than life heroes - shared wildly differing skillsets that made each absolutely necessary to the team and overall success of each mission. No one character could do it without the other.

As a metaphor for filmmaking crews in general – and more so micro-budgeted guerilla film warfare productions, The A-Team is a pretty tidy fit.

Episode 4 expanded the team ever so slightly from episode 3 by adding two theoretically minor yet absolutely essential roles: an assistant to me, the director/producer, in the form of Angeline Hadman, and a camera (and light) assistant to DOP Dan Read, In the form of camera-knowledge-extraordinaire Dennis Moldovan.

Episode three underlined certain limitations in regards to crew manpower and we were at times stretched pretty thin, with Dan having to be both DP and Gaffer under the confines of an already tight schedule. For episode 4 I, as producer, (the guy with the money) committed to amending these inequities.

Like the aforementioned A-Team, each of the 7 proved invaluable, bringing something specific to the table; willing to do whatever needed to be done - doubling up their roles when necessary – in order to aide production and get it over the finish line. When you’ve as little money as these episodes have, there simply isn’t room for additional fat.

The challenges to this particular episode (compared to the other 3) were numerous: find a chicken shop plus actor/extra to play chicken shop worker for a small yet key scene; find a bar plus numerous extras to fill it. Get liability insurance for public venues used. Find the house in which episode protagonist, played by Tony De Gale, presides; a house that effectively reflects said character’s turbulent and chaotic state of mind. And acquire a number of essential props, the most daunting of which being six sugar-glass lager bottles (acquired on foot on the hottest day of the year from Shepperton Studios by Angeline and myself) used in a key ‘fight’ scene in the bar.

When all is said and done the game at play on any shoot is ‘collect the (planned) shots’ in a given, often limited timeframe and - with the variables each location, scene plus talent bring - get shots in the bag. And if you’ve planned well enough - and you’re lucky - add additional shot options without losing time, along the way. This is repeated daily until production end and can feel like an exhilarating yet taxing chase.

You really have to be invested in what each shot and detail brings to the table and hold onto the overall vision of what they can become. This is the ironic power of filmmaking; that something so challenging and sometimes seemingly impossible can have such an overwhelmingly powerful upside.


With everything that’s at stake within the actual shooting timeframe it becomes super obvious just how important the planning of said shoot can be. Achieving a good schedule, I’ve come to learn, is [one of] the major tenents of filmmaking.

Urban Chronicles Episode 4 was the first episode I felt we came close to achieving said tenant. Whereas previously I trusted the schedule to be sorted unattended by the 1st A.D., this round I inserted myself within the entire process, organizing more meetings with the attempt to leave fewer stones unturned. Thomas Young, Angeline Hadman and myself made a great schedule trio in this regard. It ultimately made a huge difference during the actual production knowing there was more than one ‘schedule-keeper’ and that there was always someone picking up the slack and keeping us on track.

Angeline’s role in personally assisting me was particularly useful. I’d in the past struggled with toggling between following the shot order and staying fully invested with the scene at play; this in addition as producer to keeping abreast of production decisions popping off along the way. This time around, no such issue, allowing me to stay creatively present for my talent and crew.

The addition of Dennis similarly from Dan’s side proved immediately fruitful. As mentioned Dennis’ knowledge of cameras was - to my and the rest of the crews eyes - pretty astounding. It offered Dan, as DP – already a job that carries a healthy amount of tension, focus and urgency – the opportunity to get instant answers or options when trying to figure things out, camera-wise, as well as being a trusted extra pair of hands. Dennis is also just a really stand up guy.

The aspect of filmmaking that’s kinda luck, particularly when bringing in new blood, is chemistry. This is perhaps less noticable when things are going smoothly but the experience of being on various sets in different capacities informs me that it can’t be faked. To that end I’m extremely pleased with how we gelled on this one.

I’m also really grateful for all the extras, who were in fact just my friends, who came down of a Saturday morning to support my efforts, gain a bit of filmmaking insight, and hopefully have a little bit of fun. Each of them made it very easy for me and made something (in acquiring bodies in a supposedly busy bar) that potentially could have been an obstacle, possible.

The house I eventually used for the episode’s protagonist belonged to one Sal Yousef. Sal, though not trained, also answered the call for his services as an actor in the chicken shop scene. He was priceless in both capacities.


Following the A-Team theme (and though not technically crew), if there was a person closest to fictional tough guy B.A. (Bad Attitude) Barakas it would be episode lead Tony De Gale, whose energy, unpredictability and occasional sublime brilliance has been captured for all to eventually see.

And so the plan came together, in the end, though not without cost; and I’m not talking the financial kind. What I’m beginning to learn is that making things, no matter how small, has an emotional price that’s borne out of collective effort and forcing your way over the line. If a set is a microcosm of life then so are the lessons learned. So in that way what balances the toll, is the education, the kind that can only be achieved by hurling yourself into the fire, face first.