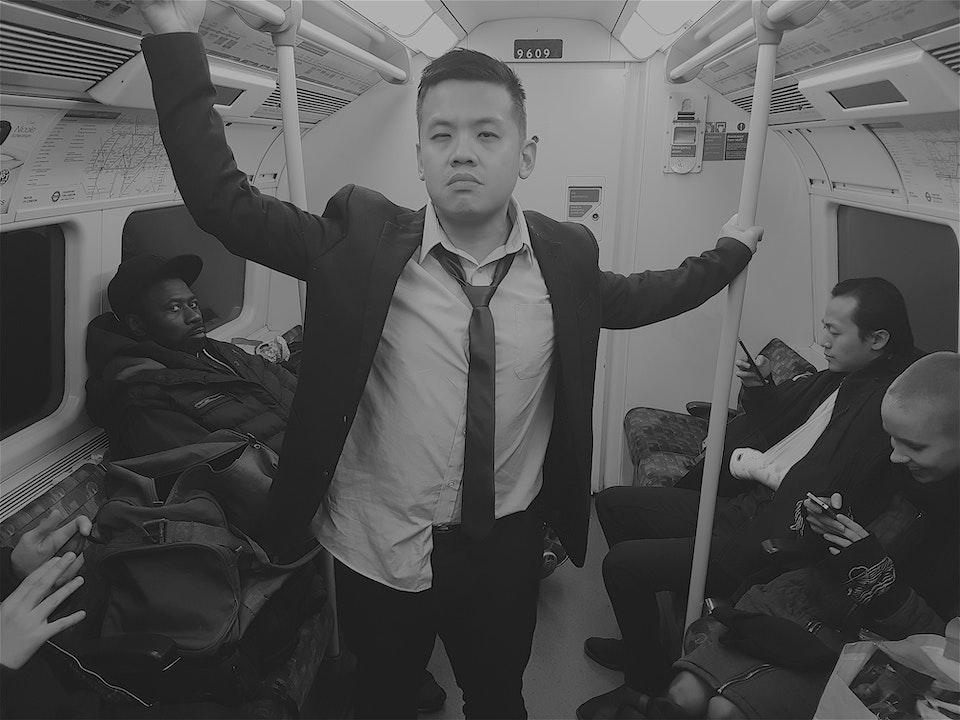 This blog documents the pitfalls and hazards of filming in extreme public view, as well as the literal rollercoaster of emotions that accompany such a foolhardy endeavour..

At the end of the last day of filming, which was day 5 of what was supposed to be a three day shoot, my DOP turned and said to me: “let’s not film on the moon next time”, which was his way of saying, don’t feel the need to crank up the level of difficulty more than this crazy-ass episode has been, as that seems to be the trajectory you’re on.

This stuck in my mind as there’s no denying he had a very good point: the original short, The Light, was shot in a live junction in North Grenwhich; we shot from about 10:30pm till just before sun up. We found ourselves what we assumed was a super quiet junction only to realize it was just down the road from the 02 center where a huge wrestling event was being held... this, in our naivety, took us by surprise to say the least.

Live shoots are, of course, totally unpredictable, no matter how much you plan. Episode 1, which has already been documented, was set in a lift on an estate – which was again a live scenario with production having to take regular ‘pauses’ in order to facilitate residents using the lift to go about their daily lives.

This happened frequently, with some residents, rightly, taking verbal issue with our frankly unwarranted presence. Putting out fires is something you have to get used to when shooting guerilla but even with that being known, filming on the tube was on a whole other level. 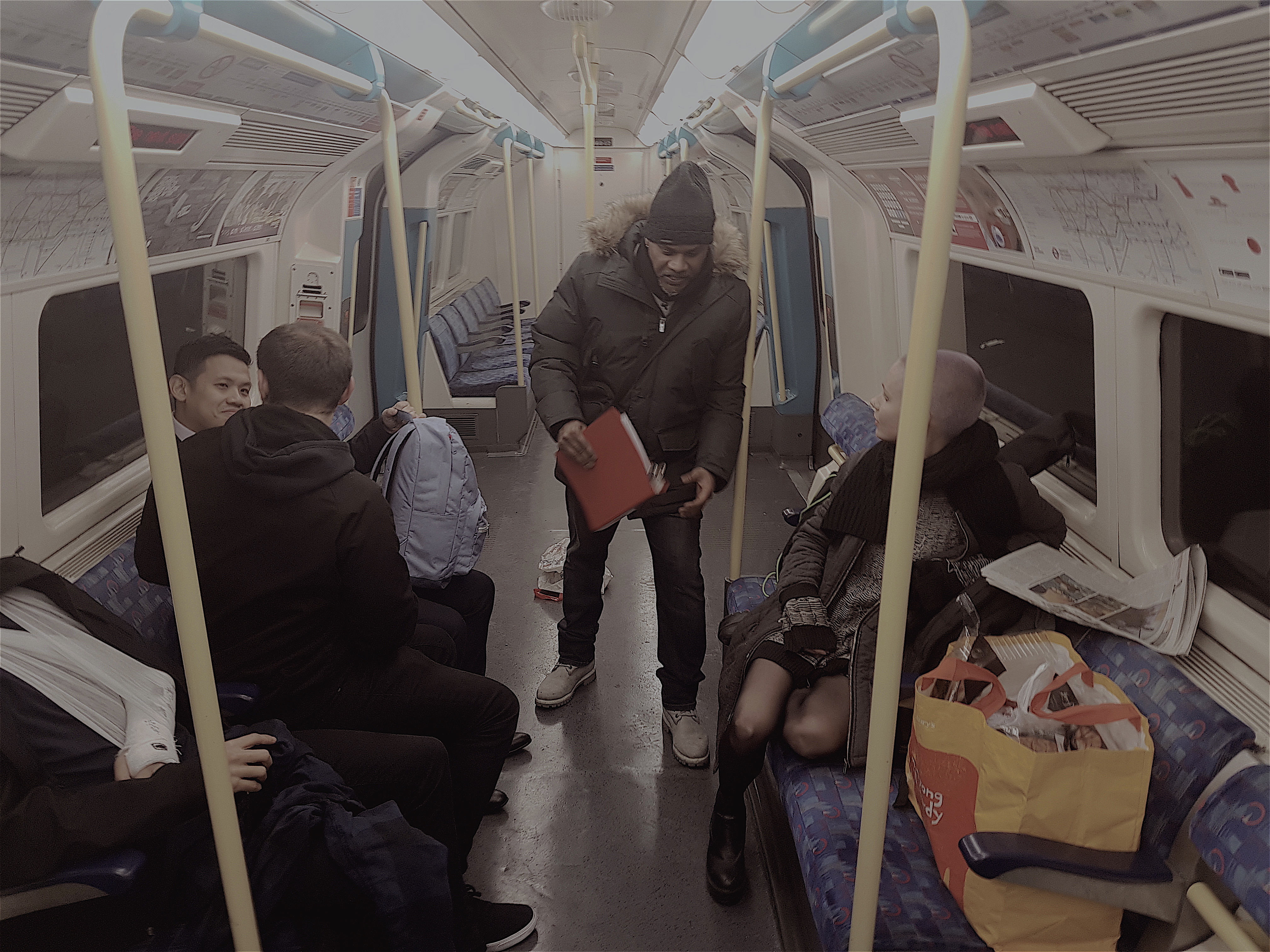 Impromtube 1: the tube doubled for many things, including a waiting area
The story for episode two centers on an intoxicated 'City Guy' on a tube who may or may not be delusional about an (Urban) stranger, at the other end of the carriage, who threatens him whilst moving ever closer.

This sounds like a good idea on the page and the fact the script was only 5 and a half pages also made it very, very doable.. in my mind.

My first slight concern came once I completed storyboarding, as there were a lot of shots. The way I rationalized it with myself though was that, as opposed to the previous episodes, episode 2 was not dialogue heavy. In fact there’s so little dialogue I felt we’d just zip right through shots with little fuss, making it a true filming-on-the-fly experience.

This was my first mistake.

The next alarm bell came when sitting down to talk with potential DoPs: the response I got (in their eyes even before they uttered a word) was “are you insane?!” .. “nice idea and we appreciate your stones, but this will be horrendously hard.”

This was my second indication.

My response (I proudly felt) was that of a real filmmaker, countering it would ultimately be worthwhile for the potential of what the episode could be. As well as stating that, if nothing else, it would be an adventure and great story to tell. The truth is it’s natural (and easy) to be initially upbeat but that unshakability can rapidly dissolve when in the thick of it.

The third indication was something less definitive yet the thing I bizarrely trusted the most.

Running up to the first day of filming I started experiencing an anxiety the likes of which I’d not felt before. It was stronger and more constant and grew louder the closer we got.

My mind would run through all the scenarios where things could go amiss and the results were overwhelming. This, despite the fact my 1st AD, Tony De-Gale, who’d started with a healthy amount of pessimism, had come all the way around - enthusiastically predicting the shoot would be “easy”, based off of the shooting schedule he'd put together. Despite this, my anxiety persisted.

There’s usually a point with filming where you’re able to use all the pent up anxiety and sort of distill it into focus, on the back of being well prepared. A kind of peace washes over you from having ticked every box. Yet, along with Tony and Dan (my 1st AD and DoP respectively), as we left my place to head to the first days meet point, that sense of peace deeply eluded me.

I remember us meeting head Production Assistant Thomas Young and Sound Recordist Ben Adams for the first time as we’d only communicated via emails and messaging up until that point. As we waited for the actors to turn up we joshed around and I remember distinctly feeling like I was stalling for time; that the joking felt like a safe defense but soon they’d be looking directly at me for answers.

The actors turned up in drips and drabs over the next forty five minutes and we decided everybody should wait in the platform waiting area. The plan was to meet around 10:30pm and go till bout 4am, yet it was approaching half eleven and absolutely nothing had been shot.

Once everyone eventually turned up we had in total 15 people congregating within the platform waiting room in an atmosphere that was akin to a party. There were people having make up done, people getting changed and people snacking and chatting within an extremely small festive environment – all the while the clock was ticking down with my anxiety growing alongside it.

Myself, Tony and Dan made the decision to ride the train down whilst waiting for the actors to get ready, to give ourselves a sense of how busy the tube line was that night and to finalize a few queries regarding when to get off the train and return back to our starting point etc.. By the time we got back to the actors and crew it was around 12 midnight. 12 midnight and we’d still not shot a frame.

There’s a certain point where whatever fear you have is overridden by the desire not to waste this precious and unique moment – with all this convergence of talent - that ‘s ultimately finite and fleeting. This is usually the point where the filmmaker as general persona comes out (for me, anyway), as there’s no one as deeply connected to just how precious that time and space created is; no one who’ll be as deeply traumatized if it’s squandered.

This was that point for me, as if Popeye had finally taken his spinach, where I finally felt ready to lead from the front. 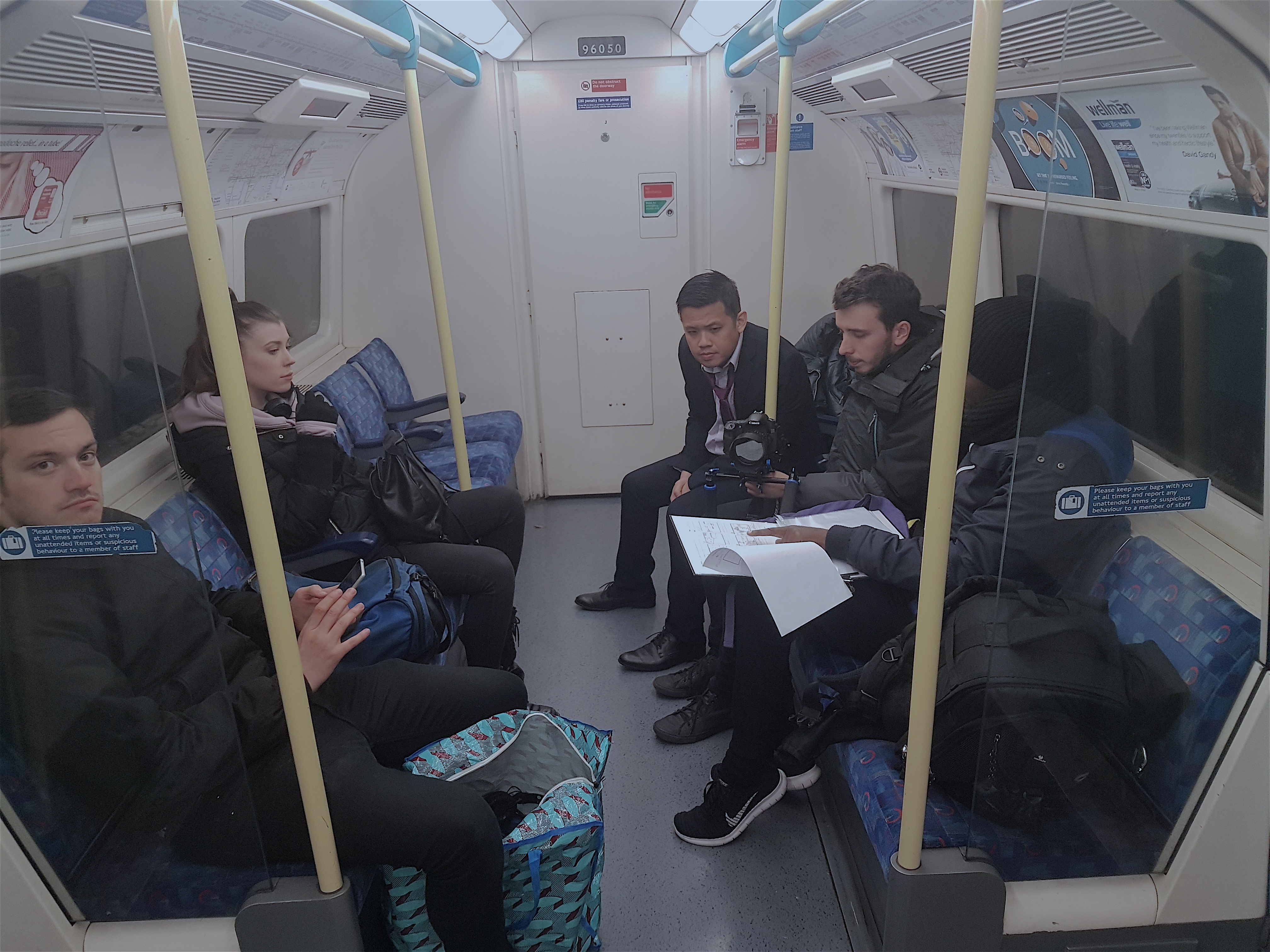 Impromptube 2: the tube doubles as a meeting room

This, unfortunately, was also the moment the train gods announced they’d be unexpectedly closing part of the line (the exact part we needed and had planned for) and that there’d only be a limited service for the rest of the night.

On top of this, the ongoing, party-like congregation of cast and crew taking place on the platform (for hours at this point) had finally caught the attention of the tube staff. So much so they ordered us to leave never to return. They made it clear it was obvious we were up to something fishy and, at the very least, a platform was no place to party. This happened to us at more than one station and, at a certain point, we found ourselves running out of platforms to get off and wait at, as our constant reappearance was creating all kinds of alarm bells to the respective platform staff.

The final hit came from the realisation there were, in fact, two trains running on the same line; with two subtly distinct interior designs that most everyday passengers would not give a thought to, yet a very big and problematic deal if you're a filmmaker seeking continuity! What this meant was that we had to choose one type of train and stick with it, reducing our time and options even further.

This was a rough double (and even triple) blow as I saw the night’s plans literally disintegrate before my eyes. What was clear was that we had to try and salvage something from the night from that point on.

We got everybody on the train and filmed as much as we could, so much so that thinking back on it is kind of a blur. The filmmaker general was well and truly present and even though we were under extreme pressure there was something pure and even exhilarating in working with that level of fury and focus, as well as having the safety net of all your planning instantaneously go by the wayside.

This, in many ways, was guerrilla filmmaking at it’s purest, even if it was ultimately short lived that night.

I remember having a very tough conversation with Tony and Dan, with them essentially forcing me to accept these facts and impressing the urgency of passing on this info to the rest of the cast and crew as soon as possible, so as to keep their options open. The ensuing conversation with the entire team was a tough reality check of where we were, where I had to own and explain the night’s loss as well as come up with a cohesive plan going forward that felt feasible.

The conversation of whether to scrap the next day came up, which raised questions in me of whether to continue on at all - such was the beating we’d taken that night. It truly felt kind of impossible. The anxiety I ‘d felt edging closer to the first shoot day proved to be legitimate.

I’d come face to face with the magnitude of the endeavor; I had to accept that any one of the things that went wrong that first day could happen again, and that in order to accomplish this episode we’d all truly have to accept the unpredictable nature of the scenario.

It was a lot of lessons to take in and learn from and still only be day one, for sure.

The ensuing four shoot days, that were spread out over the course of three months due primarily to actor availability, had their own share of drama and mishaps but were nothing in the ballpark of the rude awakening that was day one.  In fact, for this particular venture, it very well could’ve been a blessing in disguise as, through the foundations of the first day’s disasters, every proceeding day got progressively better as we learned and refined ways of planning and becoming more efficient.

If there’s one thing I’d pass on from this experience it’d be to surround yourself with dedicated and understanding people. I can say with certainty that had it not been for the commitment of the overall team, this episode would not have been achievable as you truly can’t do something like this alone.

The one thing I was correct about was that it sure was an adventure and story to tell, but, in the words of Dan, here’s to NOT shooting on the moon on the next one!